pbognar wrote: ↑
Fri Mar 05, 2021 8:22 am
I wonder what the Windows DAW landscape would look like today if Emagic had not been bought by Apple.

Hayeah, without a doubt, "emagic logic" was probably the most advanced
DAW (folder hierarchy, environment, ...). Everything was very well thought
out in the early days - something you still look for in vain in many today's
DAWs. That's why Apple bought this very program.

If the takeover by Apple had not happened, "Logic" on the Windows
platform would certainly have displaced Protools entirely. But also some
other competitors would not have the market share that they have today.
free mp3s + info: andy-enroe.de songs + weird stuff: enroe.de

one of the first to allow for non linear song arrangements, with sequences being able to play other sequences, which you can nest as many times as you like, which I used to great effect in my Jungle/drum and bass productions

You just draw in a play sequence command, much like penciling in a note in the note editor, and not unlike song arranging in modern DAWs, but this happens inside the midi note editor

Sadly something that is quite hard to find these days!

Was just gonna mention this. In 1990, a lad on my estate was making rave music on Music X with an Atari ST and I (I was 14 then) was blown away.

Does anyone else remember Cakewalk Home Studio 4XL? that was my first daw in about 03/04.

I did have a dabble around that time as well on Reason Adapted and Cool Edit which later on became Adobe Audition.
You do not have the required permissions to view the files attached to this post.
Top

Cakewalk Pro Audio 9
In the days when we called it sequencer
You do not have the required permissions to view the files attached to this post.
Dúnedain
Top

skwrl wrote: ↑
Fri Feb 19, 2021 7:46 am
My first intro to music software was a scoring tool called MusicWorks https://www.youtube.com/watch?v=VWMOwyrBstE (I got to play with this when I was 6 or so) and much later I used MoTU Digital Performer 3 and ProTools Free in a class in high school.

I still have the 1984 macintosh and the diskette for MusicWorks in my closet, if only the software wasn’t corrupt.

I could never remember what it was called, but that's the one, I totally recognize it. The OS was on a floppy in those days. Ca '86. Years later I wanted to look at one thing I did with it (I ported the thing via a serial port to an early MIDI interface and to a DX7, an Ensoniq Mirage and a Yahama drum machine) and had to go see Leuenberger (Yamaha dealer and original FM programmer) at his store and his kid had a copy, amazingly enough so he brought it in. I can't recall why I thought he would have it that many yrs later. Weird thing is I got it to work somehow (had to be 2003).
Youtube
Top

I had Cakewalk Home Studio and Project 5. P5 was not the greatest investment but it did lead to getting Dimension vst version for a nice price
Top

my first computer music experience was a mountain computer music system. Entered notes on a stave with a light pen. Cant find any vids of how it worked-is that old. After that was Steinberg Pro24 where I started learning that the IT industry was where all the people who couldnt handle the high ethical standards of used car sales went to ply their skills
Top

fairlyclose wrote: ↑
Fri Apr 16, 2021 4:02 pm
my first computer music experience was a mountain computer music system. Entered notes on a stave with a light pen. Cant find any vids of how it worked-is that old. After that was Steinberg Pro24 where I started learning that the IT industry was where all the people who couldnt handle the high ethical standards of used car sales went to ply their skills

fairlyclose wrote: ↑
Fri Apr 16, 2021 4:02 pm
my first computer music experience was a mountain computer music system. Entered notes on a stave with a light pen. Cant find any vids of how it worked-is that old. After that was Steinberg Pro24 where I started learning that the IT industry was where all the people who couldnt handle the high ethical standards of used car sales went to ply their skills

what I had sat between those two in expense and sophistication - I did not have the keyboard for example.
Top

If so, Reason was a sequencer for a long, long time.
Top

It was kind of a pet peeve of mine. Everybody started calling sequencers DAWs. A DAW is the Digital Audio Workstation. The whole thing: computer, sound card, controllers AND the audio/MIDI/sound sequencer. No matter if it recorded audio tracks. A Korg Triton is also a DAW
MacBook Pro M1 . 16GB . 1TB . Logic Pro . Bitwig Studio . Renoise . Reason . FL Studio
Top

I still have version 6 on floppies somewhere. It was the point at which I gave up on Cakewalk. I wasn't really aware of the technical details at the time, but, I knew that it was not able to keep rock solid timing with midi clock. I believe that it was related to how midi timing was implemented in Windows 3.1 vs DOS. Cakewalk for DOS was rock solid using the MPU-401, but that relied on the MPU's internal midi sync features.

It marked a serious transition for me because I was very productive with Cakewalk for DOS using my collection of drum machines and externally synced midi devices. I tried Logic for the PC for a while then temporarily switched to a Mac to try to incorporate Max. I still have the stupid serial port dongle for Logic. Now, talk about a dongle worth complaining about.

I got fed up with all of it and switched to hardware for a decade, a decade that I didn't really produce much music.
Get thousands of plugins absolutely free!
Top 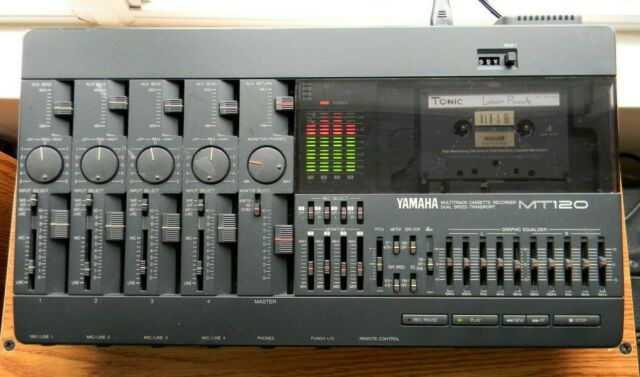 I still have it, haven't turned it on for 20 years, but I made tons of stuff with it.

Then I decided to use the free version of Cool Edit to bounce stereo tracks from the 4 track, so I could avoid at least some level of tape degradation, and also apply effects offline, as I only had a delay guitar pedal and my amp's spring reverb for effects.

Then something called N-Track studio which I don't think I ever really used, Then a scaled down version of Cakewalk, called Guitar Tracks, Then CubaseVST 5 with the parallel port dongle.

Now, just about everything other than the 2 DAWS I can't stand.

Got more songs written in the 4-track days.
Top
114 posts