I mean the cynic in me thinks it's pretty coincidental that this thread has been dead for over a month and it get's resurrected on BF? Then I remember if you actually read the thread you probably won't buy this if you have an ounce of integrity.

Think about that.
Top

Kelvin doesn't do what P42 does.
Top

Kelvin in no way can do what P42 does. And so can't the 600 plugins I know either. If you would use it to the extend like you will use P42 (if you had it), what means on every channel and on some even in serial, you'll come up with a boxy and narrow as well as clouded sounding mix with no transients intact. Like with every other saturator I tried the same thing, like VSM-4 or MAS.

Those three all do great great stuff, but not what P42 is capable of and especially not in an additive cumulative way.

They are great for parallel work and individual single channels though.

But please stop comparing saturator plugins with P42. It should be clear by now that this doesn't make any sense at all.

PS, the Kush transformers aliase like hell. I usually don't care about that at all but in those cases they sound simply hard and sharp on top. They are cheap for a reason imo.

P42 could make me breakfast every morning, I still wouldn't buy from this company. And neither did you... so?
Top

First, this isn't in any case a matter of discussion for me as it changes not the slightest about the actual quality.

Second there is nothing to add about what's not actually commonly known and meanwhile backupped by many mix and mastering engineers.

Third, I'm saying goodbye to this Forum, will delete the account. I simply am so occupied I have no time to be active here anyways.

Also he (nichttuntun) forgot to mention, that he is beta tester for Pulsar Modular and received the copy for free as NFR.
I do myself always mentioned this, as I'm tester for different vendors (not this). But praising a product without mentioning this once, is not ok in a forum.

Still P42 is not bad in sound, the interface improved a bit with recent versions, also a new GUI is announced.
On GS DrAudioBot explained how to get "in the ballpark" without P42:


- you'll need to have a copy of Kazrog True Iron.
- set it to „4001B“ (the tone is close to P42’s!)
- you might have to set the crush to „2x“
- add an EQ of choice before TI with high and low shelf filters enganged. the shelves can be tricky to match and should have a relatively steep slope or a "pultec-y dip" if possible.
- use TI’s „strength“ parameter as a second coloring/intensity knob.

You will not have the internal HP/LP filters or REV B as in the original.

This is not a 100% replacement (duh!) but for anyone who simply is low on budget atm and would like to have a similar tone, esp. in the saturation/break-up part.

For Ableton Live users:
I created an effect rack that covers the most important features of EQ and True Iron spread onto the 8 makros. I can share that via PM

There are people in this (audio tech) World who buy EVERY.SINGLE.PLUGIN. that is new to market and flavour of the month; perhaps they are billionaires (I always think of that guy on GS who really, really loves slate and is tech billionaire...) or perhaps they are spending their parents trust fund money or maybe they can just write everything off in tax because they are cashing those sweet Spotify checks.

These people are present in every forum and social media platform and they love to talk about their new toys. Now I'm not saying that I don't fit into that category (lol) but I certainly consider my purchases from a ton of different angles.

Now am I a cancel culture special snowflake because of that? Maybe.

But more likely if something is not adding up for me, either not making economic sense or something else regarding a product I bide my time and see what happens. Plugin patience. I do this with hardware too. It's because I've wasted far too much time and money in this game and I know that a new toys never solve problems.

But I can can safely say the universe will have come to it's cold conclusion before I buy P42.

nichttuntun wrote: ↑
Fri Nov 26, 2021 2:35 am
PS, the Kush transformers aliase like hell. I usually don't care about that at all but in those cases they sound simply hard and sharp on top. They are cheap for a reason imo.

Here is a 3000 Hz sinewave going through different plugins. Also tried 5 kHz and it didn't change much.
I somehow gain-matched the harmonic distortion structure so that the fundamental and 3rd harmonic would be comparable for all plugins.
RED is pre-saturation, GREEN is post-saturation.

This is a 44100 session and kind of a "stress-test" situation anyway. 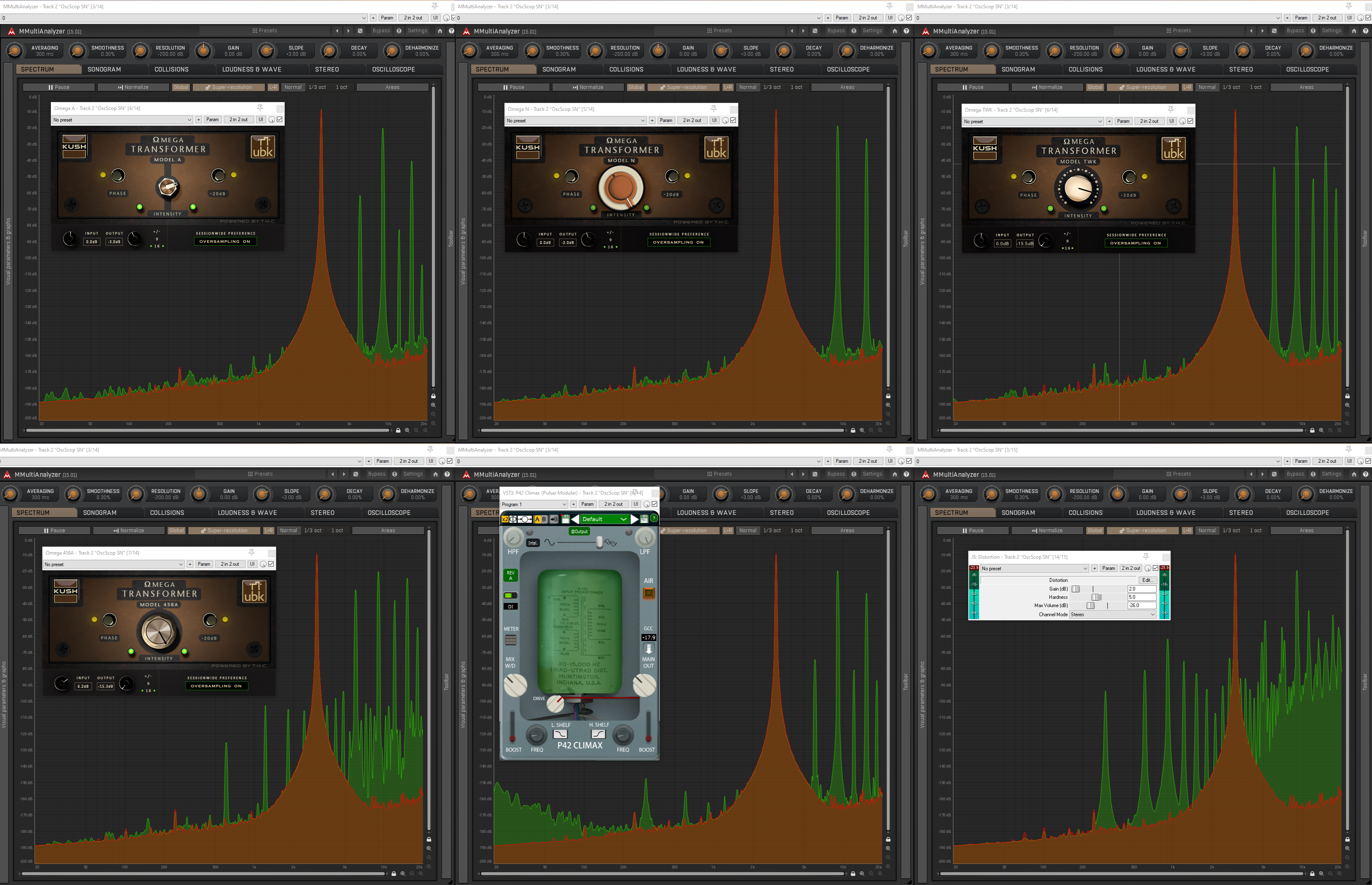 The "transformer" type saturation plugins, Omega A, Omega N, Omega TWK are extremely clean.
The Omega 458a "tube" type saturation had a much stronger 2nd harmonic and a far richer upper harmonic content resulting in some foldback, which the OS managed to keep below -100 dB and quite far from bad aliasing.

The P42 is with 2x AA engaged and the "intelligent" mode turned on, which according to the manual, scans the incoming audio and reduces the aliasing. And it did a fine job (compared to the alternative "vintage" mode) with the static sinewave. I didn't test much with more dynamic source material going through the above mentioned real-time scanning AA algorithm.

The last one was simply to post an example of something actually "aliasing like hell", with prominent foldback above and below the fundamental at audible range.
Top

Aside the low CPU usage, what does P42 do different or better than Kelvin? I'm curious
Top

Aside the low CPU usage, what does P42 do different or better than Kelvin? I'm curious

That's the thing though isn't it? it's never "better" it's always just different.

It's like saying "This new shade of purple is sooo much better", but it's not is it? How is it better than any other shade of purple? It's what you do with your palette of colors that matters.

Especially true of saturators. When a new tube of paint comes out I'm sure every artist lines up on their respective forums "Oh just demoed it, best purple ever, game changer. Expensive yes but worth it. Makes other purples look cheap!" ...um?

It's laughable. Different is the same as louder. You are always tricked into thinking it's better. Novelty is the enemy of good judgement.

Having said all of that, price gouging is the least of my concerns with this product. No way I would invest in P42, seems like a massive risk. I'll check back in 24 months.
Top

masterhiggins
KVRAF
2704 posts since 31 Dec, 2004 from People's Republic of Minnesota

Not sure what it is about this company but something about them screams potential rug pull. I’ll wait a couple years myself and see what becomes of them.
Top

masterhiggins wrote: ↑
Fri Nov 26, 2021 9:17 pm
Not sure what it is about this company but something about them screams potential rug pull. I’ll wait a couple years myself and see what becomes of them.

You know "professional" prices are ok by me. Without going into the details on the whole prosumer revolution (which is 20 years old now, thanks Adobe!) and how the market for audio tech is entirely different from 15 years ago I am willing to pay professional prices.

You know what I want for that? A professional website. Payment options that don't make me check the lock icon on my browser (no idea if this is a problem for pulsar btw). I don't wanna be a beta tester. I want a functional well designed GUI. I'd prefer if the face/head of the company didn't engage in forum wars (for a start). Ethical business practices would also be preferable but most of the time that really shouldn't even be a concern.

Plenty of small companies manage all of that without notice and they still charge market prices, below market prices and offer great value.

I can see some of the Saturation knobs in the images provided are not fully turned.
On P42, you had the DRIVE knob maxed at +12dB this is an extra push made specifically to raise the harmonics. Furthermore you had Saturation slider at 150% (design was 100%, but increased to satisfy users requests for a more saturated sound).
https://www.pulsarmodular.com/
Pulsar Modular
The Sound is... UNBELIEVABLE!
Top

I can see some of the Saturation knobs in the images provided are not fully turned.
On P42, you had the DRIVE knob maxed at +12dB this is an extra push made specifically to raise the harmonics. Furthermore you had Saturation slider at 150% (design was 100%, but increased to satisfy users requests for a more saturated sound).

Yes, all those plugins deal with gain in very different ways. Each one provides an entirely different intensity for "fully turned". If I cranked the gain knob to the max on the Omega A and TWK, the harmonic content structure would have become way too different to be fairly compared (at least in the way I intended to).

As I previously wrote, I gain-staged and matched each plugin to have a similar relation between the fundamental and 3rd harmonic (because the 2nd harmonic's amplitude was differing way too much between plugins).
Just for the sake of being more visually clear, I adjusted the harmonic profile so that the fundamental would peak at around -10 dB and a 3rd harmonic would peak at around -20 in the graph.
The P42 didn't just have drive to +12 and saturation to 150%, it even had a few extra dBs of clean/digital gain going in, needed to raise the 3rd harmonic to a level comparable to the others.

Since some plugins were referred to as "aliasing like hell", the goal was just to display the generated harmonic content approaching the Nyquist frequency, from a critical situation with a heavily saturated/distorted fundamental frequency relatable to the highest octave found in common pitched instruments (rounded up to 3 kHz), which are generally the ones suffering the most from aliasing, compared to unpitched ones like cymbals which despite being naturally closer to Nyquist, they already come with lots of inharmonic overtones.


Furthermore, the P42 in that screenshot is showing totally negligible foldback peaking way below -100 dB in a 44100 session and extreme conditions, which is close to perfect behavior and shouldn't really worry anyone.
If I had shown the P42 badly aliasing I would understand your concern, but it didn't, and that's actually one more reason to be proud of your product.

The Omega 458a is the one actually getting the most unfair treatment because in order to have a comparable fundamental + 3rd harmonic situation, it had to raise the 2nd (+ extra stuff above the 3rd) an awful lot more than the others.
Top

dionenoid wrote: ↑
Sun Sep 26, 2021 11:53 am
Reverse psychology is definately at work here. Ask a really high price and some ppl will believe that it's really that good.

haha good one, good one. You should also write this on youtube. oh, you already did

. I did and reached my own conclusion. We had 'console plugins' hype some time ago, now we have 'analog line amps' hype.
It has a nice sound for sure and can fit many peoples workflow. Just not mine, I went with Lvc Preamp-MAX and Ghz Tupe this black friday.