You might have heard it in the grape vine. We're looking for detailed feedback on the Digital Osc:

This version of Diva has a preliminary GUI for the Digital Osc and Uhbie filter. Please do not post screenshots without that disclaimer!

Actually, we've just gone 1.2 - no major feature news (yet), but VST3 support, VST2 finally 64-bit on Mac too and many, many things fixed or improved!


We're happy to announce that as of today, Diva officially bears the 1.1 version number.

She's now available for download/upgrade on her own, new product page:

We'll send newsletters and press releases on Monday, as Friday is usually a bit too late in the week.

- Multi-threaded operation allows use of multi-core capabilities
- In many cases, Diva's filters are now a lot faster

Final (Installer, but no info yet) 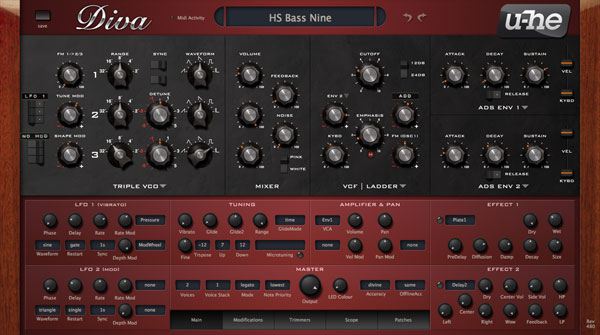 Fixed yet another bug
Added Presets
Made Installers

Also - if you have a serial number, please check if it works

Please try the Offline Render function in your host (DAW, that is):

If they sound different, then it works in your host. If they sound the same then please let us know which host you have used...

(we'll try to compile a list of compatible hosts...)

Note: Some hosts such as Reaper have a "notify plugins of offline render status" option. This must be on.

Build 475 - this one should be almost release grade...

(if you have productions with automation: Render those tracks first before updating, parameter automation may be messed up due to changes)


Note: Patches made with previous betas may not sound exactly the same anymore. There's a readme with all fixes/issues and hints for preset conversion


Some exiting news! I think the UI design is far enough to give an impression.

While a few labels are missing and out of place, you can clearly see the structure.

It's a rather big ui, but it will be scalable down to 70% (half the size) and up to 150% (twice the size) in small steps of 10% without loosing its sharpness and readability. At least, that's what we've planned.

I have a "leftover project", something that popped out on the way to future Zebra enhancements and Berlin Modular completion. And because I found a great name that wasn't taken yet, I thought I'd post it here. Before anybody else takes it. (As you know, D16 also announced a "Lush", like I did for Berlin Modular)

So what is it?

At the moment it is a little synthesizer plugin which I use to test and develop various modules. It's a ugly, it's grey and it's a nuissance to use. What it does though, it contains various models of selected modules from selected synthesizers that recently pile up in my place. Over the months whenever I bought or borrowed a synth, I have immediately started to analyse oscillators, filters and envelopes. From that I have often built my own versions, based on circuit schematics, hearing and measurements. Just to see if it's doable and how they'd fit in Zebra, ACE and or Berlin Modular. Other times I just mangled some stuff in Zebra to find out how it's done.

Slowly arised the notion that my testing environment would make a great product all by itself: Simple, retro, beautiful - if only a proper user interface was plopped around it, and if maybe all those geeky knobs would vanish. And if I ever managed to throw all those algorithms in the same project folder.

Anyhow. Today the name came like an apparition to Howie and me:

I have no haste with this, I'm sorry if this creates any hype around another piece of vapourware. I just want to "grab" the name for when I find the time to do the UI and a week or two of polishing. The reminiscence to Zebra's dinosaur crossgrade was just too tempting not to

Urs wrote:And because I found a great name that wasn't taken yet

+1 -- Hands down, that's THE BEST use of that overabused word ever.

dhalfen wrote:+1 -- Hands down, that's THE BEST use of that overabused word ever.

A learner synth would be right up my street right now.

mcnoone
Banned
6136 posts since 9 Oct, 2007 from an inharmonious society

Sounds good.
When will it be available?
Monomo Sound
Top

mcnoone wrote:When will it be available?

At some point. As I said, no haste... and some of the machines I'd love to have her impersonate havn't even arrived yet.
u-he.com | Facebook | Tweets
Top

Urs wrote:Yeah, hmmm... female vocalist samples... can't reach the website... won't be in my Diva (which I happily write with small letter, no prob).

Hm... Clock DiVA maybe? Just to make it even more confusing for customers.