Blue Cat's Plug'n Script 3.32 has now been released as a free update. As you can see below it is a rather large update, check it out! 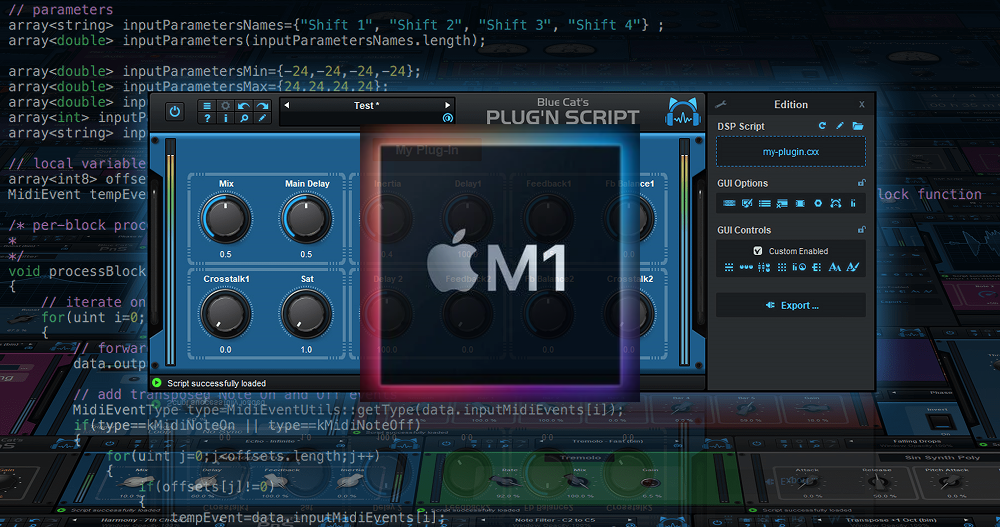 What's New:
- Single Installer on Mac (all plug-ins formats).
- Full Apple Silicon (M1 processor) support.
- New "network slave" mode to run as an audio/MIDI processing server for the Connector plug-in.
- Windows: ASIO Control panel can now be launched from the audio settings window in the application.
- Audio engine can now be restarted from the audio settings window in the application.
- Dropped 32-bit support on Mac.
- Now requires MacOS 10.9 and newer.
- Improved MIDI events timing precision in the application.
- Added MIDI tap tempo support for standalone application.
- Standalone application can now send MIDI events to external devices.
- Select individual MIDI I/O in standalone application.
- In most plug-in formats, internal audio I/O configuration can now be selected regardless of the configuration defined by the host.
- Improved MIDI & automation control settings with lock, reset and "save as global setting" capabilities.
- The plug-in and app can now send MIDI events back to a control surface when MIDI-enabled parameters are modified in the user interface.
- It is now possible to export plug-ins with an unlimited number of parameters.
- The user interface does not throw errors anymore when using more than 48 input parameters in a script (they are simply not displayed).
- Fixed latency compensation changes not always picked up by host applications.
- VST3: fixed random crash in Ableton Live 11 upon load.
- VST3: fixed parameters update issues in Studio One when bouncing tracks.
- Windows: fixed an issue with unicode window titles.
- MacOS: fixed export window colors in dark mode.
- MacOS: fixed plug-in editor positioning issues in some hosts with some particular zoom values

Thank you for the update! Could I please suggest a feature for your future plugin versions?

It would be so good if the standalone apps/plugins could restore the previous window size when reopening. I tend to use Axiom, PatchWork and Plug'n Script in 140% scaling or higher and every time I restart them they return to the default size. Would be useful if the default could be customizable. Thanks
Top