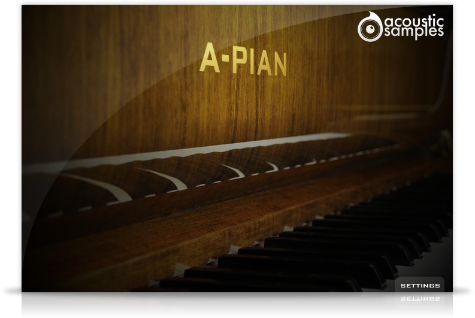 What is it?
PianoA-PianAcousticsamples
This product is "Powered By" UVI Workstation. The OS and Format icons listed below should be accurate for the latest version of UVI Workstation.
Format(s)
Operating System Availability
License & Installation Method
Voucher / Code for redemption on other website
Tell Me More
For related news items, downloads and more please see the full KVR product page for
A-Pian

The A-Pian Grand piano is and old French Gaveau piano. Gaveau was a French piano manufacturer. The company was established in 1847 in Paris and used to be one of the three largest piano makers in France (after Érard and Pleyel).

This particular piano was built in 1960 and is referred to as a "crapaud" ("Petite Grand" in English), which means that it's a little smaller than a "quart de queue" (baby grand). It has a very particular sound, very bright and full of inharmonicity in the bass due to the short length of the strings.

This library was our first attempt at finding new ways of sampling a piano. We tried to reduce the size and still keeping the most important parts.