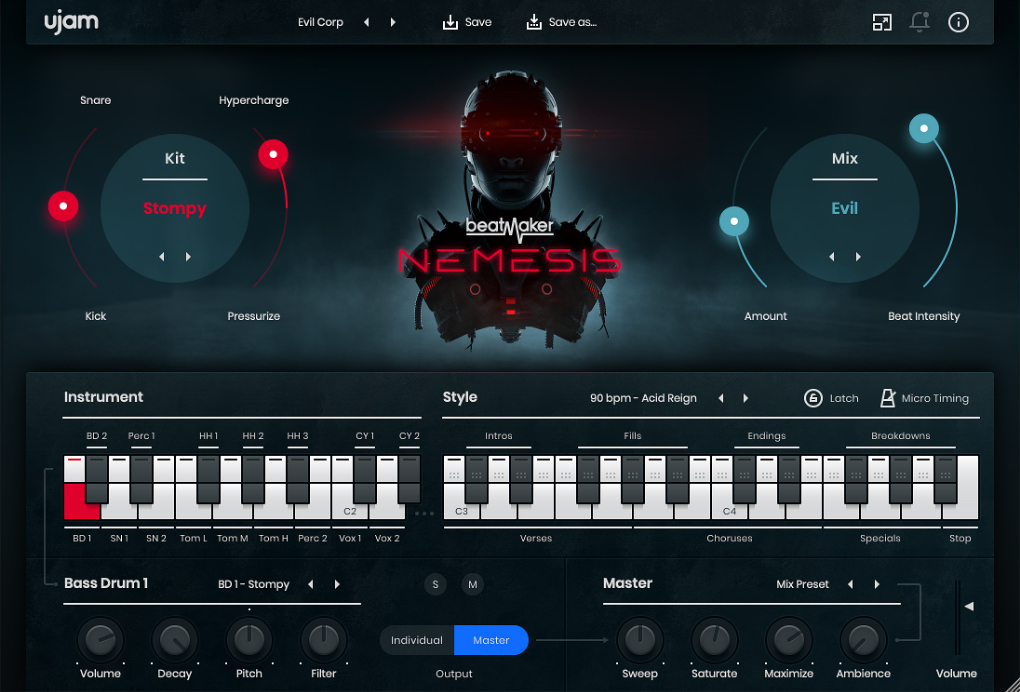 Put on your exoskeleton and gear up for dystopian adventures with Beatmaker NEMESIS. The action-packed drum machine has everything you need for creating powerful, dark and complex music.

The heavy-hitting drum sounds in NEMESIS have been designed to be aggressive and futuristic. The Mix presets provide different types of distortion and compression for beats so tough and punchy, they'll cut through any mix. NEMESIS really shines in any situation that requires heavily processed, broken aesthetics.

Inspired by contemporary film and game scores, NEMESIS brings the rhythms of dystopian cyberpunk scenes and epic space battles: A range of sounds from mysterious, dark and cold to explosive and intense.

Veteran Drum and Bass producer and DJ Rusher is the Musical Director and sound designer behind NEMESIS. Rusher's mastery for dystopian soundscapes and staccato beats is at the red-hot pulsing heart of this Beatmaker.

Beatmaker NEMESIS is already being used in game development. RUSHER is working on the soundtrack for the upcoming title Kato by Imagine Dreams.

Features at a Glance

Take a look at the NEMESIS inventory for producing the most intense broken beats.

Create your music without overthinking! Select and adjust one out of 12 custom mix templates. Each is a complete multi-bus mixing desk under the hood with multiple effect chains per channel.

Push sounds in different directions:Hypercharge uses multi-band distortion for a more aggressive, electrified sound. It can really be driven over the top, especially in combination with the Mix Presets. Pressurize uses multi-band compression to condense the signal, and cut through the mix.

There are 10 different drum kids and 30 styles to choose from. In addition you can use 12 mix presets to get more variations on the styles. Even in a very crowded mix these drums will pop out and drive the production.

Check out my review and demo