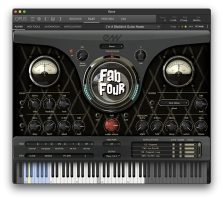 What is it?
Sound ModuleEastWestFab FourFab Four Virtual InstrumentMP Guitar VIsMPE
This product is "Powered By" Play. The OS and Format icons listed below should be accurate for the latest version of Play.
Format(s)
Operating System Availability
License & Installation Method
Voucher / Code for redemption on other website
What does this mean?
For related news items, downloads and more please see the full KVR product page for
Fab Four

Fab Four is a virtual instrument inspired by the sounds of the Beatles, using the same kind of period instruments and authentic rare EMI recording equipment the Beatles used to create their music.

"The Beatles had a profound impact on me, as they did for millions of others" said Fab Four producer Doug Rogers, "and they were the initial influence for my fascination with sounds. They were creative geniuses that never rested on their laurels, always producing exciting new music and sounds with each new record, much of it ground-breaking. Putting this project together took well over a year of research, equipment procurement (much of it from collectors), and putting together a team that could pull off such a feat; but it was a labor of love for us all, and we feel the result is truly worth it."

No expense was spared finding the same kind of period instruments and rare authentic EMI and other recording equipment the Beatles used to create their sounds to produce this collection, much of which, ironically, will end up in EastWest Studios, where the Beach Boys "Pet Sounds" was recorded, the inspiration for the Beatles "Sgt. Pepper's Lonely Hearts Club Band" album, according to Paul McCartney.

Well over a million dollars worth of instruments, amplifiers, microphones, recording desks (including very rare EMI REDD tube and TG12345 desks), outboard equipment (including Fairchild limiters and EMI RS124 modified Altec compressors), and Studer J-37 tube multi-tracks were used in this production. If you are a film/tv/game composer, or a musician/producer looking for sounds not found in other collections, this is it. Blending these unique and sometimes bizarre sounds with today's music should enable you to produce something truly fab.

INTRO
Fab Four by EastWest Quantum Leap is a wonderful collection of virtual instruments that encompass the essence of The Beatles sound. This comprehensive sample library is extremely customizable and useable. It's is not a simple collection of Beatle-esq loops, nor is it a simple player or inflexible rompler. For many years I have been piecing together sonic elements of the 60s vibe, one instrument at a time — a Ludwig bass drum from here; a Mellotron flute sample patch from there; "vintage" effects from who knows where. I was able to assemble some cool virtual instruments and effects along the way, but having a wealth of the exact tone in one convenient treasure chest is amazing. I still use some of my old bits and pieces, but not many — Fab Four is comprehensive. I especially dig a some of the drums kits (toms are especially cool), the Hofner and Rickenbacker basses, Hammond, and Martin D-28 acoustic guitar. The Revolution Guitar patch is addictive — I read somewhere that this famous Lennon guitar tone was created by connecting two vintage EMI preamps together. All-in-all, a great deal of detail has gone into creating this collection.

OTHER THOUGHTS
• For many, the iLok requirement is a con.
• It would be cool to have some simple legato vocal backing tracks, i.e., Ahh, Ooo, Ohh, etc.
• I would like to see the keyboard patches expanded.

SUMMARY
Fab Four accurately capture the timeless vintage vibe of The Beatles. The sounds are authentic, and the instruments are inspiring. Although the Lads won't be available to help write any songs, the intrinsic nature, indispensable quality, and character of their sound is found it this virtual instrument collection! I've been eyeballing Fab Four for a few years. Later this year I'll be teaching several interactional music classes on the history of Western pop, and the 60s will be the highlight of the course. Having the power of Fab Four was something I had to have, and I have no regrets. It's easy to use, sounds great, and is a lot of fun. I'm sure my students will love this thing! I highly recommend this sample library to any eMusician, producer, film and game scorer, sound designer, DJ, etc., who is looking to add a taste of Beatlemania to their tracks. I can easily imagine using these instruments for Indie Rock, Hip Hop, EDM, and so on. Why not? Great stuff. I give this fabulous library four thumbs up. Thank you, EastWest, for creating such a timeless and useful bundle of virtual instruments.