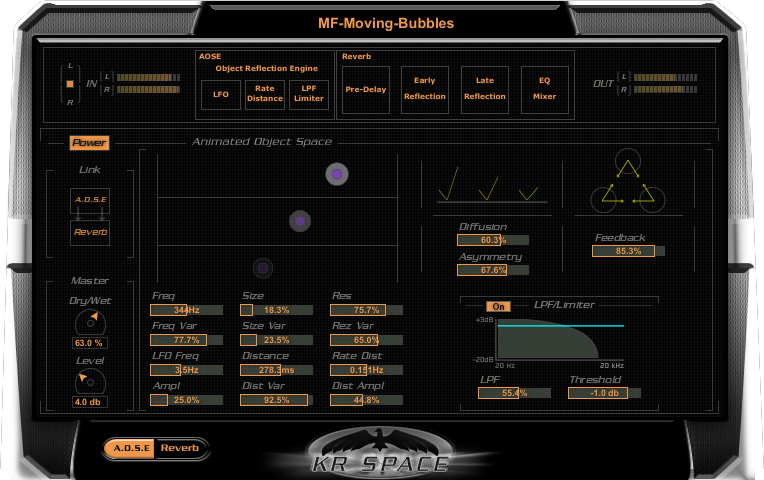 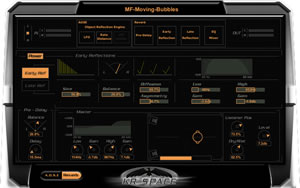 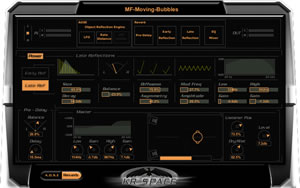 KR-Space is a modular multi-effect plug-in which can produce a multitude of different types of effects, from traditional echoes and reverbs, to very complex soundscapes, modulation and filtering effects, resonating echoes and reflections, saturation effects and other types of unusual effects.

To achieve this wide range of effect creation KR-Space uses a proprietary design and a flexible modular architecture where the different available modules can be switched on and off or routed in various combinations allowing more flexibility in effect design.

The modular architecture also allows more efficient CPU utilization since only the modules that are switched on contribute to the CPU overhead.

KR-Space introduces the Animated Object Space Emulator (AOSE) where the user has control over a number of spherical objects which are placed in the virtual environment and affect the sound output in a multitude of ways. These objects have various user controlled characteristics like size, resonance, oscillation frequency, reflection characteristics, etc. and can be animated (moved) in the virtual environment affecting the sound output.

Problematic installer (unclear installation instructions--the readme gives different instructions than the manual, neither way installs the product enough to satisfy the product manager for activation), never could activate due to "missing files", no support replies, but fairly standard and ok reverb unit.

Took a chance and spent $10 in a Guitar Center Clearance; understand why it's on clearance now.

Writing off the ten bucks, uninstalling. Too many alternates to waste time trying to fix this.