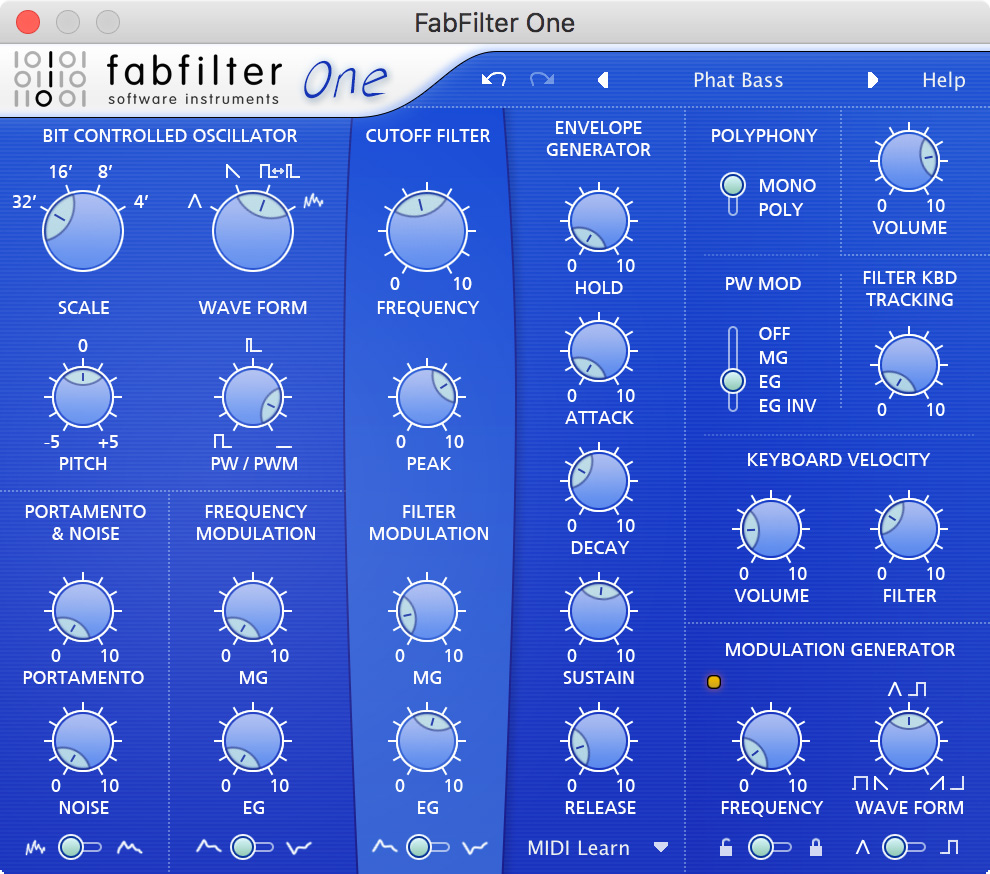 What is it?
Synth (Analogue / Subtractive)FabFilterOneUniversal 2 Binary
Format(s)
Operating System Availability
License & Installation Method
Voucher / Code for redemption on other website
Tell Me More
For related news items, downloads and more please see the full KVR product page for
One

Fabfilter One and Saturn are the only Fabfilter products I own. I gladly parted with the asking price for Saturn and am forever grateful for this transation, as it's the gift that keeps giving! Fabfilter One was I think Fab's first attempt at a commercial synthesizer, and they started out with the KISS methodology (Keep It Simple, Stupid!)

The sound quality of both the oscillator and the filter is exceptional, and I believe it was one of the first VST synths to really deliver a convincing emulation of an analog filter. I picked it up second hand because I saw it in the market place and can't resist a bargain. Would I have paid the full price for it? In my current situation, probably not, as I have the "analog" side of things pretty much covered, but now that I have it, I enjoy it for simple sounds, that filter, and it's overall character.

Around the 50 pound mark is quite steep for a one oscillator synth in all honesty. Had there been two oscillators, or some more sound shaping options, this wouldn't be an issue, but the reality is that while this was on the cutting edge of sound quality many years ago and well worth the asking price, it hasn't aged well in terms of bang for buck. Luckily, the sound quality it-self is still sounding pretty flawless, so this whole point is a matter of opinion entirely. YMMV.

The oscillator is simple but unique. The triangle and square wave have a considerable amount of even harmonics, which means you can't really make "hollow" sounds easily. The triangle's waveform is more of a distorted sine, but it serves it's purpose well, and I'm a fan of this purely because it's different, with a similar bandwidth as a normal triangle. Because the square wave sounds more like a saw and square mixture waveform, the sweeping PWM effect is a little bit less dramatic, with less cancellation at the nulls than is the norm, but it's still a recongizable PWM sound. The plus side is that those extra harmonics, again, make One stand out from the crowd.

One pet hate of mine is when a PWM implimentation doesn't let you specify a modulation *between* two pulsewidths, but instead assumes you want to morph from a square into whatever pulsewidth you've selected. Setting a narrow pulse and then modulating the PW a bit with an LFO or envelope is out of the question, though thankfully the envelope is inverable via a switch, which opens up a few more options.

Now onto that filter. This is really the instrument's saving grace. Despite being a single-mode, single-slope resonant lowpass (often compared sonically with Korg's MS-20 filter), it's very powerful in it's ability to transform sounds. Not only is there a complete lack of digital artifacts such as stepping and roughness, but the filter responds to high resonance levels not with an ear-peircing screach, but instead with a complicated overtone structure, which almost brings it into FM and ring-modulation territory at times.

I even managed to create a detuned effect by setting the filter to resonate close to, but not exactly on a harmonic of the oscillator. All of these effects are given a firm footing by the perfect and variable key tracking you can assign, allowing you to create some complex and interesting waveforms by using the filter to extend the harmonic structure of the triangle wave.

The GUI is spot on and responds to mouse activity perfectly, and the portamento is very musical sounding. However, portamento doesn't seem to affect the filter, which is a slight disappointment given that the filter is such a big part of the musicality of this instrument.

Overall, the limited features of One and the great sound quality combine to create a synth that takes you back to the "good old days", where creativity with knobs and switdhes was the order of the day. It can create a fair amount of tones for a 1-osc synth, but I feel it falls just short of it's current price point in today's market.

1 1
Fabfilter One is my favorite synth.
It is responsible for almost every sound in my tracks. I forgot about other synth since I purchased One.
You can program great basses, leads, pads, effects and whatever You wish - keep in mind that this is one oscillator subtractive synth. It is realy hard to belive that you can make such a great palette of sounds with only one oscillator.

I love One for it's simplicity. It keeps the creativity level very high. The panel is well laid out and simple to program - there are no hidden menus. Two mouse modes (circular and linear) for knobs is vary nice thing.

Now for the main thing that One is almost all about - the filter. It sounds just awesome. There is some dirt and acid in it, it lives, it has this "analog" feeling, it is rich. It reminds me a little KORG filters like in MS-10, MS-20.

One is very stable. Beside studio, I use One in live performances and there are no problems with it - this is one of those rock solid synth.Read Review

3 1
Great sounding synth, I use it in almost every track these days. It is very much like a Korg MS-10. I agree with their claims that the filter sounds great and is very musical. I love that FabFilter paid proper attention to the portamento as well... this is the first time I've seen a developer do that. The portamento feature on most VA plugins isn't nearly as playable or musical as on an analog synthesizer, but FabFilter got it right with this one.

One is a simple, well laid-out synth that is easy to use and very stable. The internal preset system is nice, the presets install to the "My Documents" folder on Windows which is a little different but you can move them. Works with my host's internal patching system as well. Registering the synth was easy.

FabFilter's thinking behind this synth is that pure, quality sound is more important than extensive features. I agree completely, however I find myself wanting a second oscillator more often than not. Typically I'll layer two instances together to achieve this, although programming patches this way is twice as much work. If FabFilter were to release a "Two" with features similar to the MS-20 I would be all over it.Read Review

4 0
I haven't posted a review for a VSTi before as I usually only had demos and there hasn't been any that have really grabbed me. However I got to try the FabFilter One at a friends, who, like me isn't loaded and so only gets something if it's really worth it - so when he buys, I'm interested! He got the One after checking the demo (something I have done since) and mailed me excitedly about this top little synth. I was sceptical - 1 filter? Pff, how's that gonna sound any good? I had visions of DaHornet (thin, indifferent and not really that good), but how wrong I was..

The One has one (sorry!) of the sweetest filters I have heard in a VSTi, all in part due to it's ability to self oscillate and it's fine tuned slope. To my mind it is on par with the impOSCAR - the only other soft synth to really remind me of analogue - and it sounds like my beloved old (and sold :( ) Roland MC202 (SH101 too I guess)! It has the kind of sound where you can come up with a nice arp like pattern and sit for hours opening and closing the filter, changing the waveshape and varying the pulsewidth without it getting boring. It's like making Pete Namlook like ambient tracks which are just a manipulation of an arp but as the sound is so nice you just lose yourself in it!

Ok - it has a really nice filter. It also has a touch of noise on the waveforms too - analogue synths had noise too, and the One seems to benefit from this.

On the minus side tho...

No LFO sync, no sine wave, odd EG implementation (also a good thing as you may get results you didn't expect!), no actual real world values on the knobs (hz, etc) and I couldn't find a way of assigning controllers - although we didn't RTFM :). Oh, and it's mono - you should know that tho!

Overall - Well, any synth that even gets close to my old MC202 in terms of inspiration and quality of sounds is a winner. If it's a VSTi - even better. If it's this cheap - it's a steal!

Roll on One v3 with sync, polyphony, sine wave and more!

Oh, and their forum and support seems quick and friendly too, which is cool!Read Review

In My Cart!Monolush ONE Sounds
Presets for FabFilter ONE by Kreativ Sound$5.00

In My Cart!Total Bundle
Plug-in Bundle by FabFilter$999.00

Products similar to One...