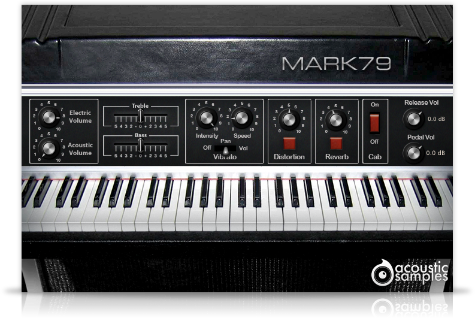 What is it?
Electric PianoAcousticsamplesMark IIMark79Rhodes
This product is "Powered By" UVI Workstation. The OS and Format icons listed below should be accurate for the latest version of UVI Workstation.
Format(s)
Operating System Availability
License & Installation Method
Voucher / Code for redemption on other website
What does this mean?
For related news items, downloads and more please see the full KVR product page for
Mark79

The Mark79 is a Classic 73 Keys Electric piano from 1979 (MarkII) recorded with the direct output plugged into a tube preamp.

The MarkII model was issued in 1979 and major jazz and jazz-rock stars like Chick Corea have made its sound very famous. It really is very different from the MarkI but still has that incredible sound that everybody knows and loves.
We wanted to give this instrument something special and to build the library in a way that any player would get a feeling of the real thing so we decided to also sample it "acoustic" meaning without plugging it into an amp.