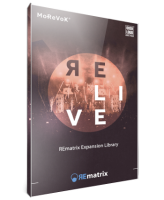 What is it?
REmatrix ExpansionOverloudRELiveReverb
This product is "Powered By" REmatrix Player. The OS and Format icons listed below should be accurate for the latest version of REmatrix Player.
Format(s)
Operating System Availability
License & Installation Method
Voucher / Code for redemption on other website
What does this mean?
For related news items, downloads and more please see the full KVR product page for
RELive

RELive is an IR library of live concert venues, captured during a real live tour in 24 beautiful Italian locations. A collection of 120 IRs and 300 presets.

RELive contains 5 IRs for each one of the 24 locations:

Since the impulses were captured in outdoor venues, we needed to thoroughly and carefully clean up the recordings in order to extract the purest responses, while maintaining the essence of each location.

In summer of 2018 we followed the Prisoner 709 Caparezza tour, capturing the IRs of 24 different live venues along the way. Some of the venues were located in historical Italian squares, other near the seaside or close to the mountains, with each of them offering an unprecedented sound.

The stages were equipped with a dBTechnologies VIO L212 PA System and the IRs have been captured at the same volume of the night shows.