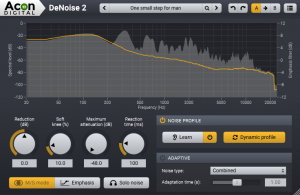 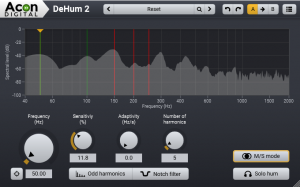 What is it?
RestorationAcon DigitalNoise ReductionRestoration Suite
Format(s)
Operating System Availability
License & Installation Method
Voucher / Code for redemption on other website
What does this mean?
For related news items, downloads and more please see the full KVR product page for
Restoration Suite

Restoration Suite 2 is a suite of four cutting edge plug-in for audio restoration and noise reduction:

All four plug-ins have received major improvements both in the processing algorithms and the user interface compared to version 1. DeNoise 2 introduces the novel dynamic noise profiles that help reducing noise that varies randomly over time, such as wind noise or rustle from lavalier microphones. Where the earlier versions merely captured a static noise print with time-constant noise levels, the dynamic noise profiles capture statistics from the noise to be reduced. The noise suppression algorithm then estimates the most suitable noise threshold curve for the noisy input signal using the measured statistics.

DeNoise 2, DeClick 2 and DeHum 2 now support Mid/Side (M/S) processing, which can reduce unwanted fluctuations in the stereo image. The core algorithm in DeClick 2 received major improvements and now better preserves transients and can be pushed to higher click and crackle sensitivities without introducing artifacts.

DeHum 2 has a new automatic fine-tune button that triggers automatic estimation of the hum noise frequency. The hum tracking and suppression have also been improved. DeClip 2 was improved in terms of audio quality and now offers even more impressive reconstruction of clipped signal peaks. All the plug-ins in the suite now support surround and immersive audio formats up to 7.1.6 channels.

Acon Digital Restoration Suite 2 is available as VST, VST3 or AAX for both Windows and Mac or as AU plug-ins for Mac. There are 32 and 64-bit versions for Windows and the Mac version is 64-bit.