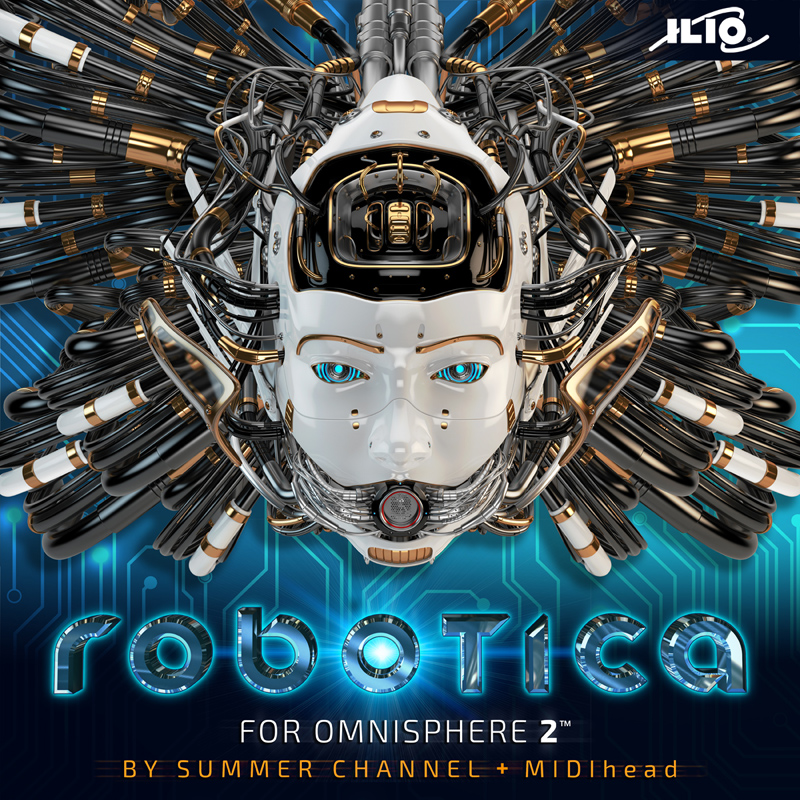 What is it?
Sci-fiAmbientBPM syncCinematicElectronicElectronic MusicEpicFilmscoreILIOMIDIheadPresets for Omnisphere 2Robotica
Format(s)
Operating System Availability
License & Installation Method
Voucher / Code for redemption on other website
What does this mean?
For related news items, downloads and more please see the full KVR product page for
Robotica

Cinematic Sci-Fi is bigger than ever, and so we're answering the call to provide fresh new sounds to producers, sound designers and composers from around the world. Jesse Scott of Summer Channel and MIDIhead proudly present a new patch library for Omnisphere 2 called "Robotica." In it, you'll find ominous drones, atmospheric pads, spaced-out sound effects, ethereal and epic synths, interesting robotic effects and textures, vocoder sound bites, and BPM-locked movers.

Robotica is a professional producer's toolbox of sounds that will help you construct your next sci-fi soundtrack, or add futuristic flare to any type of electronic music. Robotica will transport you from low earth orbit to voracious black holes in distant luminous galaxies in a mere instant, and provide you with endless options for blending atmospheric textures in new and unusual ways.

At the heart of Robotica is over 400 MB of brand new, never released source material derived from popular modern analog synths, vocoders, guitars, time-stretched vocals and sound fx, as well as a few other boutique digital sources. Every sample was meticulously recorded at 48/24 (with some at 96/24) and processed for maximum sound quality.

"This is definitely my favorite library that I've worked on to date. This library is the culmination of everything I love about Sci-fi flicks. Even if you're not using this library for soundtracks, there's still something in it for everyone," says Jesse Scott.

MIDIhead adds, "I've long been fond of recording original sounds and turning them into something completely different and useful. From ear candy, to unexpected surprises I think you'll enjoy toying around with Robotica and have a lot of 'Favorite' star-clicks in your patch browser."

Robotica loads quickly and easily into Omnisphere 2.1 or higher. Each sound is optimized for use with your modulation wheel for real-time control on stage or in the studio.

Robotica is an Omnisphere 2 patch library like no other. Download this inspiring new set of sounds now from your favorite music retailer or online from ILIO.

About The Sound Designers:

Jesse Scott / Summer Channel is an electronic music producer who has released countless original albums and singles, and has written original music with Adam Lambert, Jes and many others. He's also remixed artists such as Madonna, Seal, David Bowie, Paul Oakenfold, Johnny Cash, and Frank Sinatra (just to name a few). He's written music that has appeared in major motion pictures such as Bad Boys II, Tomb Raider, and The Art Of War; television shows like CSI and Buffy the Vampire Slayer; and numerous video games. He's also an accomplished music teacher on lynda.com.

Michael (MIDIhead) Babbitt is an electronic music producer and songwriter who's released an award-winning synthpop album and remixed songs from Kaskade and Late Night Alumni, has had original scores in movie trailers for The Matrix Reloaded, Silent Hill, and Mad Max-Fury Road, as well as television shows such as Dexter, CSI, Prison Break, Myth Busters, Miami Ink, America's Next Top Model (to name a few) and many remixes and original songs appeared in Konami's Dance, Dance, Revolution video game series. He's also produced all of ILIO's Omnisphere patch libraries.