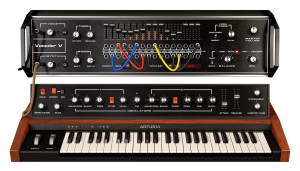 Vocoder V is not your standard vocoder. It's not your standard synthesizer either. This is your new voice-transforming playground. Unlike the traditional vocoder, it combines carrier and modulator - synth and voice analyzer - into one powerful unit.

If you'd prefer not to sing, there's even a dedicated sampler built in so you can process whatever sounds you want to. Part voice analyzer, part vintage analog synth, part cutting-edge sampler - this might just be the missing piece of your sonic puzzle.

Turn your vocal stems into analog FM basslines; Turn your drum loops into a synth chord sequences; Turn ambient samples into harmonic drones; Anything is possible.

The vocoder was originally invented as a way of analyzing and synthesizing the human voice, used to conserve bandwidth and encrypt radio transmissions - it was even used in the military. In the hands of synth & electric pioneers like Dr. Bob Moog and Harold Bode, the vocoder became an irresistible tool used in every style from disco to death metal. Early iterations of their vocoder were simply referred to as the 'Bode' after Bode's own 7702 Vocoder design. This eventually evolved into the famous 16-Channel Vocoder that we've grown to love - and it remains a fascinating machine to this day.

From Giorgio Moroder to Daft Punk to Wendy Carlos, its vocal-morphing, synth-warping, gritty texture-weaving abilities can be heard on countless albums and soundtracks. It's even raised a few hairs with appearances on some of John Carpenter's iconic soundtracks. ...and with Vocoder V, it's your turn.