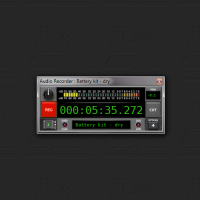 This is the last version before 1.0 and it adds complete multi-channel audio recording support, as well as many usability improvements, mostly in the patching workflow and the audio monitor.

With the new any-point recording and record groups features it is possible to "plug" the audio recorder anywhere in the patch, and record simultaneously any number of sources and channels directly to your hard drive.

The audio recorder can be mapped to external controllers and with the follow-clock option and external synch on, the process can be fully remote-controlled and slaved to any external transport master device.

Several improvements have been made to the patcher, including the new "swap" and "disconnect" actions, as well as better multi-point patching and smoother overall operation when performing actions on multiple selections.

Amongst the notable additions, VST programs and banks (FXP/FXB) can now be imported and exported via the module context menu. The audio monitoring system has been improved too, and many reported bugs were fixed.