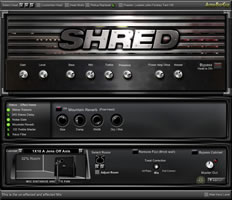 Interchange Nearly Every Aspect Of Every Head
Perhaps the most interesting feature of Shred is the feature that allows you to create a head that suits you: AcmeBarGig's 'Frankenamp' technology allows you to select the parts from any of the other heads and mix and match them for a sound all your own. You like the bass from the Marvel head? Add its bass knob. Want the Gain of the Shred Head? Add its Gain section.

Presets
ABG admits a history of providing you with "the very worst presets humanly possible". Well, they say that changes with Shred Suite which incorporates useable, great sounding, presets. Shred Suite supports banks of presets. In the past you were limited by the number of presets on your screen, or you were forced to save single presets to disk. Now you can save all the presets on the screen at once, and load all the presets from a different bank file at once.