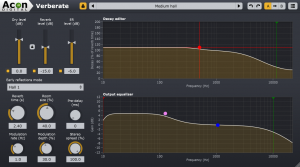 Acon Digital has updated their plug-ins for natural sounding reverberation, Verberate and Verberate Surround, to version 1.6. The graphical user interface is now resizable and they have improved a building block in the late reverberation algorithm so that it now causes even less coloration in the reverb tail.

The update is free for all Verberate and Verberate Surround customers.