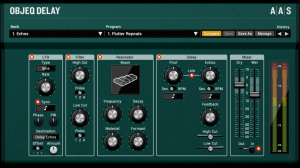 Objeq Delay is a creative effect plug-in combining acoustic filtering with a clever delay unit. The plate, beam, drumhead, and string objects impart evocative acoustic resonances to the input signal. Further shaping is also available via low- and high-cut filters. The in-series delay acts as a classic unit or can split the first and subsequent repeats to either remodel the attack or create complex rhythmic patterns. A LFO module completes the package with comprehensive modulation destinations to the filter, resonator, and delay parameters.

Objeq Delay will be available before the end of the first quarter of 2017 at a suggested retail price of US$139. Objeq Delay runs on both Mac OS X and Windows in 32- and 64-bit host sequencers supporting the VST, Audio Units, RTAS, and AAX Native plug-in formats.

FEATURED
50% Off
AX73Synth (Analogue / Subtractive)
by Martinic  $59.50
Add A Review My KVR
Was $119.00; Save $59.50 until 31 Oct 2021
$59.50Buy
BUYING!XCheckout
The Orchestra Essentials
Orchestra
by Best ServiceMercury-4 Polyphonic Synthesizer
Software Synthesizer
by Cherry Audio
Featured
An Introduction to Paragon ST