Audiffex has announced that a new version of the inValve effects, version 1.8, will be available for download later this month (September 2013). The update is free for all customers who purchased inValve for PowerCore or inValve Native.

Here's what they say: "All the effects use exact modeling of concrete circuits and components, so all the features of the original devices are included, creating very decent and pleasant change in the recorded sound. These models are not based on one concrete brand, we have rather selected the best circuits of several manufacturers and original hardware devices. We decided to convince the user by the perfect sound, not by a famous label on the front panel. The new effects have also an option to set the interface color to be easily distinguished when used in several instances in multiple tracks of an audio workstation".

"Summing Tube Amplifier (STA) mixes the wet and dry signal and it adds a nonlinear distortion resulting in more vintage sound. Primarily, this effect is designed to be used as an insert effect to fully exploit the summing circuit. The plugin has also a "Wet only" option when only the signal processed by the tube circuit is sent to the output. It allows to use the plugin also in a send bus". 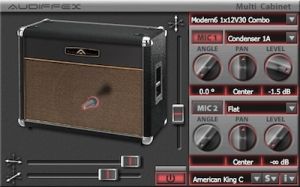 Lastly, Audiffex has announced a new product in their Guitar Line of plug-ins that faithfully simulate guitar gear, whether effects or speakers. The new Multi Cabinet is a VST 2 / VST 3 / AU / RTAS plug-in with exact models of several famous amp speakers. It is immediately available for $19.

Multi Cabinet features a selection of 12 famous cabinets with 8 microphones in a single package. Get your own 900, TSLC, Spider and more.

Find inValve Effects and STA Effects in the KVR Marketplace