AuraPlug has released version 2.0 of AmpFire (a v2.01 update is already available). 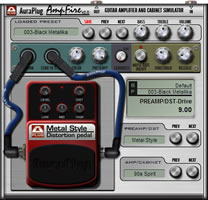 AmpFire is available for Windows as a VST effect plug-in. Until October 23rd, 2009, you can purchase it for an introductory price of €33 instead of the normal price of €40.

AmpFireDistortion / Overdrive / Amp
by audiorammer    €40
Add A Review My KVR