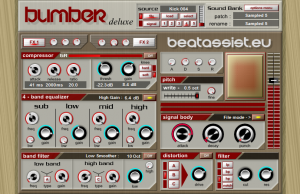 beatassist.eu has discontinued BumBer XT, the bassdrum synth and sampler, and introduced the final version of the BumBer "saga", BumBer Deluxe.

BumBer Deluxe brings all the best functionality of its predecessors, improved and better organized in a new and attractive GUI.

beatassist.eu says "this ends the production of new x86 BumBer products, keeping the updating a priority for any bugs found or reported by the users. The creation of a 64-bit version of BumBer is being considered and may become a reality."