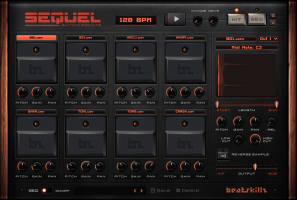 Beatskillz has announced the release of Sequel, a vintage drum sampler and sequencer virtual instrument plugin for macOS and Windows in VST3 and Audio Unit plug-in formats.

Sequel is described as "a sampling drum machine with a vintage vibe". The plugin comes with a library of the famous 80s drum machines found on countless hit records from the 80s and is still used as a standard today.