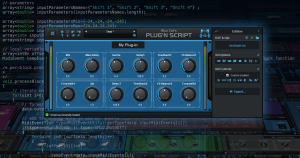 Blue Cat Audio has released a free update for Blue Cat's Plug'n Script, its audio and MIDI scripting software that can be programmed to create your own effects or virtual instruments inside most Digital Audio Workstations (DAW).

This new version of the plug-in brings many performance improvements, especially for native processing scripts, with a new DSP workload meter to measure the performance of the scripts. Plus many new features for programmers, as well as usability enhancements that exported plug-ins can benefit from when re-exported. It also adds Unicode support for Windows, and fixes a couple of issues (full change list below). Native Apple Silicon support (New M1 processor) for both Plug'n Script and exported plug-ins is available as a preview for registered users.

The update is free for registered customers and can be downloaded from the same location as the original full version (link received by email upon purchase). A special re-introduction price (20% off) is available to new customers until March 15th. Demo versions can be downloaded on www.bluecataudio.com for Mac and PC.