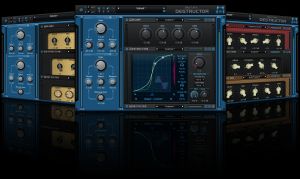 Also, new free legendary guitar tone presets are available for download from the editor's website. Crafted by guitarist Hans Van Even, they match the tone of famous guitar performances.

Price: 89 EUR or $89, (instead of 99 EUR or $99) until December 5th. The update is free for existing customers, available from the same location as the original download (link received by email upon purchase). Demo versions are available for new customers.

Find Destructor in the KVR Marketplace