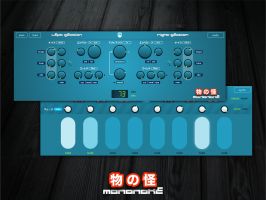 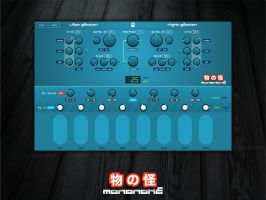 A tale of two engines
The synthesizer engines (each of the two sections has its own independent engine) have relatively simple controls, which influence a complex system of many invisible, interconnected LFOs. You never 'control' Mononoke, but rather steer it in a certain direction. The result is a constantly evolving sonic entity, yet with a distinct signature sound (in other words: this is not your bread-and-butter general purpose synthesizer).

Feedback routing
What sets Mononoke apart from other synths is that its voices (4 in each section) can be routed back into each other in multiple ways, creating all sorts of overtones and pulsating resonant frequencies. Sometimes harmonic, sometimes weirdly atonal. Sometimes clear and delicate as icicles, sometimes harsh as metallic blades, sometimes soft as fresh snow. This interaction between voices helps fuse all layers together into a coherent musical landscape.

Expressive pads
Complex soundscapes can be created live, using the 8 performance pads which let you modulate each voice independently in several dimensions. Your interactions with the pads will also be sent out as MPE/MIDI (when loaded as an AU plugin in a compatible host) so you can record and tweak your session. The onscreen pads can be latched individually so some voices can be used as drones, while others as can be added and removed as extra sonic layers. The pads are fully integrated in the Audio Unit plugin.

Connectivity
Mononoke is designed as an AUv3 plugin, with advanced Audio Unit features such as MPE input and output, a fully exposed array of AU parameters for automation and all the connectivity and scalability you can expect from modern plugins.

The standalone mode is basic (just meant for jamming and creating presets) and does not offer any connectivity, so if you want to use Mononoke in conjunction with other apps and effects you'll need to load it into a host, such as Garageband, Audiobus, AUM or Cubasis.