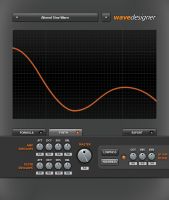 Wave Designer, an ongoing project in the early stages of development, is a very unique and useful tool concept that allows users to create waveforms and export them to a number of synthesizer formats in order to be used as oscillators for the particular synthesizer. The software will be shipped as a plug-in instrument, allowing users to create waveforms visually and then preview the sounds in real-time with their MIDI keyboard.

Basic Concept
The concept was created originally for sound designers who are tired of having very few tools to create single-cycle waveforms, and even more tired of not having a quick and painless method of exporting those waveforms in standard formats without having to fiddle around with 5 separate applications just to get a single waveforms created properly. Since then, though, DNR have accrued quite a list of possible features that would make the tool into a set of tools, and would give it a broad market appeal to just about anyone who makes music.

Pre-Order Program
This project is going to be an ongoing work that incorporates as many user feature requests as possible, and in order to fund the more advanced features of the project (freehand, import/crop, etc.), DNR are opening a pre-order program. Essentially, they are going to take all pre-order revenue and apply it all to paying for the development of new features and functionality, allowing them to develop the software faster and include stuff that users are asking for.

Why should you get involved in the pre-order program? DNR say:

More information is available from the Wave Designer web page.