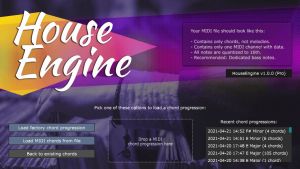 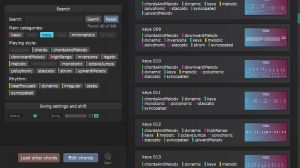 The concept is simple:

HouseEngine is suitable for all House styles, but it is a good fit for other genres as well.

It comes with a big list of presets for all occasions. The influences reach from classics like Frankie Knuckles, Larry Heard, and Stardust to the modern sounds of labels like Defected, Toolroom, or Spinnin' Deep.

HouseEngine is available as a Standard version and as a Pro version. The Pro version contains a MIDI mass-exporter that makes it easy to create hundreds of files within seconds. When you buy the Standard version, you can use all generated phrases and melodies in your own productions (both commercial and free releases). But if you want to sell the generated MIDI packs to other musicians, you need to purchase a Pro license. In all other aspects, the two versions are the same.

A demo version is is available at: feelyoursound.com/houseengine (Windows + macOS).

This video shows HouseEngine in action and explains the workflow:
YouTube/ZboLB0acwoI