Fielding DSP has announced the release of Reviver - a versatile, high-quality harmonic distortion plug-in for Mac OS X. Reviver increases any signal's loudness and brightness, adds punch and fatness, and changes color and character by adding second and third order harmonic overtones. Unlike other distortion plug-ins, that often suffer from unwanted digital side effects, Reviver is alias-free and keeps your audio crisp and clean. 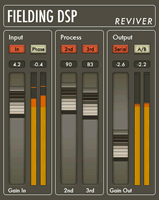 Several products aim at solving that problem; they try to digitally recreate the missing overtones. However, all distortion plug-ins Fielding DSP tested generate not only the desired harmonic overtones, but also so-called aliasing, i.e. overtones which are in disharmony with the original signal. Aliasing is an exclusively digital problem that does not appear in analog signal processing.

Reviver
By so-called internal upsampling, Reviver generates harmonic distortion without degrading the sound through aliasing, thus offering producers and engineers the possibility to benefit from all the advantages of recording digitally, like total-recall, saving money by not having to buy tapes, or saving time by editing the recorded signal with a computer mouse rather than a razor blade, without having to do without the warm and fat sound of analog signal processing.

Reviver doesn't emulate the sound of a certain analog piece of gear; rather, it tries to give the user full control over the overtones to be generated and how loud they are to be. Despite this high level of controllability, Reviver's user interface is intuitive and provides the desired result after just a few mouse clicks.

Until the end of August 2008 Reviver is sold for an introductory price of $149. After the introduction period Reviver will cost $199. A demo version is available - it expires after 14 days or 48 hours usage.