Reviver by Fielding DSP is a Virtual Effect Audio Plugin for macOS and Windows. It functions as a VST Plugin, an Audio Units Plugin and a VST 3 Plugin. 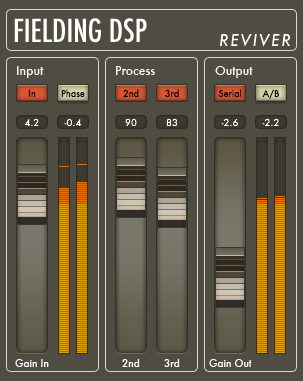 Reviver is a versatile, high-quality harmonic distortion plug-in. It increases any signal's loudness and brightness, adds punch and fatness, and changes color and character by adding second and third order harmonic overtones. Reviver is alias-free and keeps your audio crisp and clean.

Second-Order Harmonics
Second order harmonic overtones play an important role in the sonic coloration that tubes add to audio material. Their sound is often perceived as "warm" and "smooth". Reviver gives you the ability to add second order harmonics to your sound in a precise way.

Third-Order Harmonics
Third order harmonic overtones change the sound in a more aggressive way, often referred to as "punch", "fatness", or "detail". These overtones are also created by tape and overdriven solid state amplifiers. With Reviver you can control the exact amount of third-order harmonics to give your sound that extra "punch".

Anti-Alias Filter
A general problem of digital distortion plug-ins is that instead of only generating the desired harmonic overtones, they also create so-called aliasing, i.e. overtones which are in disharmony with the original signal. Aliasing is an exclusively digital problem that does not appear in analog signal processing. In contrast, Reviver is completely free of aliasing in audible frequencies.

HoRNet Halloween Sale: Plugins up to 60% off; Bundles 30% off

VSTBuzz: 64% off Nordisk Kontrabass by Have Instruments