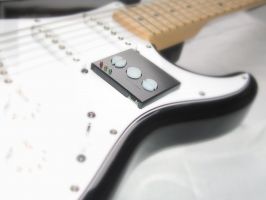 One slimline box, the FreePlayer Express, can be attached to pretty much any guitar or bass, and connects to the outside world via USB (a wireless add-on is on the way). The Express contains a highly sensitive motion sensor which – as the demo clips on YouTube show – can be used to control pretty much any kind of effect, from simply merging in a delay or reverb through to '3-D – Wah' filter effects, or even the kind of wild pitch-based effects that are possible with Saltline Audio Solutions' 'Son of a Pitch' (bundled with FreePlayer). The Express hardware is rounded off with a tactile button array and a set of status LEDs.

A planned firmware upgrade means that FreePlayer will be directly MIDI-capable – just plug it in to your audio workstation (Win, Mac or Linux), digital Amp, MIDI effects box or what have you, and you've got immediate control of your effects by movement.

Each FreePlayer unit comes with a USB cable, the FreePlayer software, and is bundled with VST plug-ins from Saltline Audio Solutions, Voxengo, MeldaProduction, NDC and FrettedSynthAudio.

Users will be able to download more VST plug-ins and sounds from the FreePlayer SoundStore, including Saltline Audio Solution's previously announced range of plug-ins developed specifically for FreePlayer.

Express is available for €149. FreePlayer also boasts a dedicated LesPaul version built into a custom pickguard, with a Strat version and others planned in future.

if UVI Drum Designer had user imported samples i'd buy it yesterday.by CrystalWizard @ 1:12 in Instruments