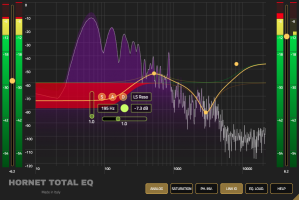 HoRNet Total EQ is a precise and versatile equalizer with a handy spectrum analyzer. The peculiar feature of Total EQ is that every parameter of each equalizer band can be controlled from the control point on the frequency chart, this simply means that you will never have to look around to find the controls for the band you are editing, but everything will be there right at your mouse pointer reach.

Listening, learning, and building: An interview with musician and PreSonus founder Jim Odom