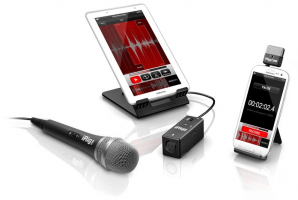 Combined with the announcement of its first recording Android app, iRig Recorder, IK Multimedia has certified that five of its iOS mobile accessories are compatible with the most popular Android devices.

iRig MIC is a handheld microphone that's designed for close-range and distance-miking applications. It's great for vocal recording and other musical applications, as well as podcasts, lectures, and more, and it enables better quality recordings than can be obtained with a mobile device's built-in mic.

iRig MIC Cast is a small microphone designed for podcasts and other voice recordings. It attaches to a smartphone or tablet via its audio jack, features a mini-headphone jack for monitoring, and offers a low-profile solution for capturing better sounding audio from a smartphone or tablet.

iRig PRE is a pocket-sized mic preamp that makes it possible to use professional XLR mics with a mobile device. It provides phantom power for condenser mics, and has an adjustable gain control for setting the most favorable input level.

All the above products work great in tandem with the just announced iRig Recorder for Android, the easy-to-use recording and editing IK Multimedia app.

iRig MIX is the portable DJ-style audio mixer that's small enough to hold in one hand, and is well suited as a hardware front end for mobile DJ apps. Its two channels each have a volume slider, EQ controls and LED meters, plus a crossfader adjusts the level between the channels. It offers plenty of I/O including RCA outputs, which are great for connecting to DJ gear and home stereo setups.

iKlip STUDIO is a tabletop stand for tablets designed for use on flat surfaces with music or other type of apps. It securely holds a tablet in place with non-slip rubber grip feet, and features durable thermoplastic components, an adjustable viewing angle, and the ability to fold up for easy storage and transport.