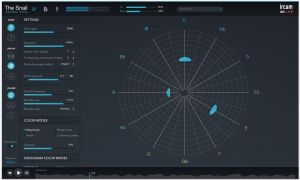 IrcamLab and Plugivery Distribution have announced that "The Snail" has been updated to version 1.4.0.

The Snail is a very high-precision frequency-domain analyzer that delivers an easy to understand representation of sounds based on the scales and notes aligned in spectrally active zones. Available as a Standalone application for Mac and Windows OS, and AAX, AU and VST3 plug-in.

Find The Snail in the KVR Marketplace