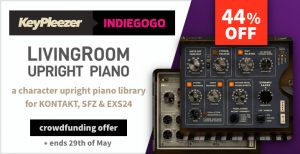 KeyPleezer has announced a 44% offer on the LivingRoom Upright Piano Complete Edition, currently in funding on Indiegogo. The virtual instrument is a character upright piano for Kontakt sampler, SFZ and EXS24.

The offer is valid until 29th of May 2021 when the campaign ends.

LivingRoom Upright Piano embodies the essence of a naturally sounding upright piano as it is when it was played for around a year since the last tuning. A slight de-tuned sound here and there, not too much or resembling a honky-tonk piano, nor as impeccably tuned as most pristine grand pianos. A versatile upright piano with a realistic sound.

All internal acoustical components and behaviours of the original piano were captured in detail. String dampening, mechanical key release sounds, pedal sounds and behaviour are among the adjustable acoustical sound layers. String and piano Body Resonances were captured separately through IR convolution reverbs for flexible coloring of the piano sound.

The LivingRoom Upright Piano is aimed at being an alternative to more pristine sounding pianos, without for that matter being out-of-function or busted. It is suited for a wide range of contemporary genres as well as classical music or jazz and can be adjusted extensively using one of or a mix of the 3 recorded microphone positions combined with the sampled acoustics layers and effects, adjustable in the instrument mixer.

It comes in two editions, the Complete Edition with a total of 23GB of samples and Intermediate Edition, which has a lighter sample footprint (5GB) with recordings from the first microphone position, the "player position". The added support for SFZ and EXS24, apart from Kontakt sampler, assures broad platform and sampler support.

Listen to audio demos and read more on the Indiegogo campaign page for LivingRoom Upright Piano.