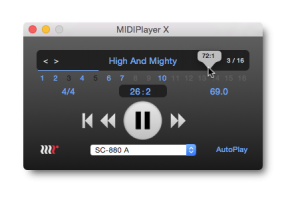 MIDIPlayer X v2.2 is a free update for existing users, and is available now in the Mac App Store.