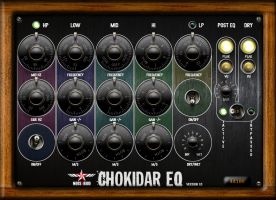 Chokidar is based and wired after an analogue concept that never got built due to the amount of noise the real world circuits would have generated. Noisebud tried the concept in the noise free digital world and thought the result was too good not to make a public release.

There's a free mini-version and a $11.99 larger Donation version.

Also, Noisebud Listen has been updated to version 1.61. The side volume when solo'ed was 3dB to loud in the previous release.