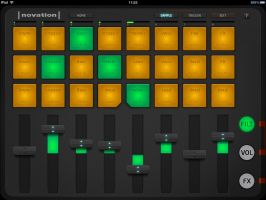 Novation has released Launchpad for iPad, a music performance app, available now to download for free at the App Store.

The app follows some of the key features from the 'Launchpad' hardware, now used by many of the world's famous DJs and performers, but strips out much of the complexity. Eight volume sliders allow quick volume changes and simple FX modes add ways to remix music and make performances unique.

The Launchpad app comes with a specially assembled sample pack that has been put together by sample producers Loopmasters.

can i somehow use my own samples?