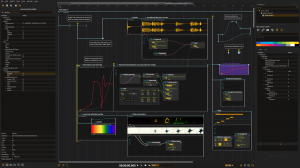 ossia score is an interactive and intermedia sequencer that allows a user to score multimedia content and processes in a timeline, including sound, MIDI, OSC messages, DMX lights, video files and effects, VST plug-ins, scripts, with a specifically tailored visual language.

Free and open-source, developed by the non-profit collective ossia.io, it provides a hybrid time-line / modular user interface aimed at solving efficiently media artists' hurdles when creating art installations, interactive pieces and such. It is available on Windows, macOS, and Linux (including on ARM boards such as Raspberry Pi for installation work), and embeds directly both the Faust programming language and the Pure Data patching software.

The gallery gives an idea of the various artworks, plays, shows, and installations realized with the software over the years. The documentation provides information and example use-cases.

The beta-test for the version 3 has started after a year of feature development: media artists, musicians and creators are invited to try it and give feedback to the team either on the forum or on GitHub where the development happens.

ossia scoreIntermedia sequencer
by ossia.io     Free and open-source
Add A Review My KVR