RS-Met has announced the release of its second commercial product, EchoLab. 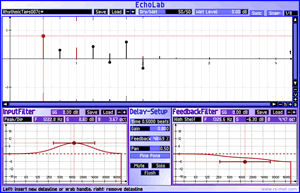 EchoLab is a plug-in for creating a wide variety of delay and echo effects. It provides an arbitrary number of delay-lines each of which may have feedback, may be placed independently in the stereo panorama and may be switched into 'ping-pong' mode (which means alternating panorama positions for successive echoes).

Moreover, each delay-line has two filters associated with it - one sitting in its input path, the other one sitting in its feedback path. These filters themselves are made up from a series connection of an arbitrary number of stages and the frequency response of each such stage can be chosen from 8 different characteristics.

Given that architecture, EchoLab allows for utmost flexibility in setting up rhythmic, filtered echo-patterns which form an essential ingredient in many styles of electronic music.

EchoLab is available now for Windows as a VST effect plug-in for the introductory price of €39. The regular price will be €59 and will become effective on 1st September, 2009.