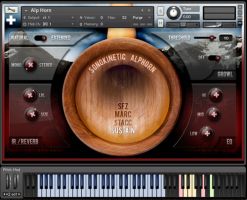 Sonokinetic has announced the release of their latest Kontakt instrument, Alphorn.

Sonokinetic have four major categories in their product line-up: the orchestral line, the ethnic line, the vocal range and the 'heritage' line. This product falls squarely in the latter category, being culturally intertwined with the white peaks of the Alps as much as the Carousel organ is indigenous to the streets of Amsterdam or Brussels.

This instrument, recorded on location at the Alphorn Centre in Friesenheim, the south of Germany, and played by renowned player and Alphorn builder Franz Schüssele, is a mix of nature and craftsmanship, producing silky smooth soft tones and rattling shouts alike, sounding a bit like a very warm brass instrument even though the whole thing including the mouthpiece is made of wood.

Sonokinetic say they had a great time with Franz trying to capture all the intricacies of this instrument, and they think they succeeded, in the Sonokinetic style, warts and all, to make for a very original and natural sounding approximation of the real thing.

Since the Alphorn has no valves it only plays nature-tone harmonics, in the case of this instrument upwards from a low F. Some of these harmonics are not exactly tempered to modern ears (most notably the one between Bb and B, and between Db and D). However sounding very off key in these cases Sonokinetic thought it good to offer a version of the instrument as you would get it with a real Alphorn player, so the 'Natural' version of the instrument was left unturned. The added benefit of this approach was that they could also add recorded legato transitions of up to three octaves up and down for the natural instrument.

For general usability Sonokinetic also made an 'Extended' version, mapping the samples over the missing notes, and tuning it in Kontakt. This extended version is polyphonic, and capable of producing beds of Alphorn ensemble sweetness. Further controls in the instrument are very basic, with a 'growl' control and a basic EQ and IR reverb.

Alphorn is available now for €49.90 from www.sonokinetic.net/products/heritage/alphorn

AlphornAlphorn
by Sonokinetic BV  €49.90
Add A Review My KVR