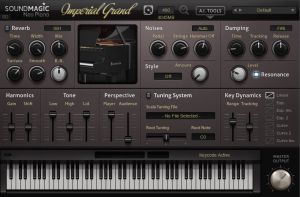 Neo Piano Chapters: Imperial features one of the two piano sets of Imperial Grand, which is also one of Sound Magic's oldest pianos, the nominee of 29th TEC Award. It samples from a Bösendorfer 290 Special Edition which has a famously rich and dark sound, the Bösendorfer 290SE establishes an great level of realism through hyper-detailed sound. From bass to highs, its rarity stands out across music genres ranging from new age to classical.