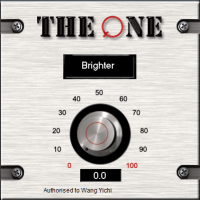 Sound Magic has released The One, a new VST effect plug-in for Windows that is described as "the easiest and the most convenient way for musicians to process their recordings". It features several options to choose from and only a single knob to implement them - that's it. There's no confusing technical terminology. Users only need to choose their goal and spin that single dial to get the desired result.

Sound Magic says "It might seem that The One makes it way too easy for musicians to achieve their sonic goals. At first glance, it might seem that this is some lightweight tone control or simply some cobbled together processors. But behind this simple knob are years of research from many pro engineers, taking some complex algorithms and effects chains and putting them at your fingertips."

Sound Magic has summed up thousands of individual mixing pathways, modeled them, developed several universal algorithms, then translated them into the language of musician. Users won't find any complicated technical terms when using The One. Instead, Sound Magic has used words like "wetter", "brighter", "stronger" and so on.