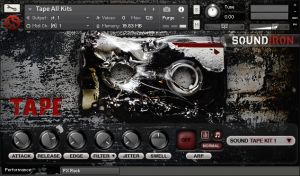 Soundiron has released Tape, a collection of hundreds of individually handcrafted and uniquely-styled percussive strikes, stingers, multisamples and effects.

Tape's unique sound comes from acoustic recordings captured through destroyed cassette and microcassette tapes, then carefully twisted and mangled into a distinctive collection of content for electronic and hybrid percussion needs.

All of the sounds are designed for complete cohesion, so that any sound can blend or be sequenced with any other sound in the library. To this end, a user can achieve results simply by turning on the arpeggiator, tweaking the sequencer dialog and mashing a bunch of keys.

This 412 MB library includes 754 samples in standard 24/48 stereo WAV format and a user interface for the full retail version of Kontakt 5.5 and later (OS X 10.8 or later / Windows 7 or later required).

TapePercussion
by Soundiron  $39
Add A Review My KVR