Soundspectral has announced the release of version 1.5 of DoublerX, an intelligent randomizing doubling VST plug-in for Windows. Formerly known as DuosX, Soundspectral says it has managed to reduce the already very low CPU consumption even more, without sacrificing sound quality or usability. 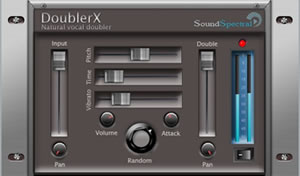 With its real-time detection algorithm, DoublerX is capable of producing natural and human-like sounding doubling effects. It takes the input signal and, depending on dynamic and pitch, the doubled result is generated in real-time. The doubled take will always be slightly different, just like a human performance would be - the randomizing and intelligent input detection is doing its part to create a natural feel.

Soundspectral says that DoublerX has come along way since version 1.0 - even though the main controls remain the same the invisible part has been developed much further.