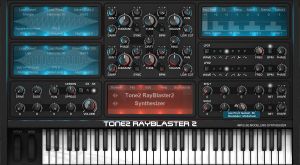 Tone2 Audio has updated their impulse-modeling-synthesizer RayBlaster to v2.5, a major update, which is available for free. It includes new features, enhanced sound quality, 43 additional patches, enhancements for the user interface and some fixes.

RayBlaster 2.5 is downward compatible with all previous versions. All existing song projects and patches can be loaded without any further steps necessary. They will benefit from the enhanced sound quality.

Sale: Currently Tone2 offers a 50% discount for RayBlaster. It is available for $99 instead of $199.

Enhancements for the GUI:

Find Rayblaster in the KVR Marketplace