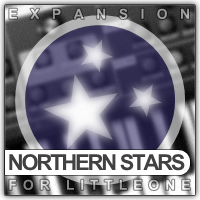 Xhun Audio has updated LittleOne to v3.1, released the Northern Stars expansion and announced the imminent availability of the XA LittleOne XT Bundle.

LittleOne 3.1 brings full compatibility with all Xhun Audio's official commercial expansions available today (additional expansions will follow). Also, this update includes several low-level changes and fixes on the GUI side, for the upcoming multi-sized GUI support feature (available with the next update).

Northern Stars (Expansion for LittleOne) is a collection of 63 evocative presets specially suited for Classical, Ambient, Soundtrack, Videogame and Film Score music productions. The Northern Stars expansion is the result of a fine sound designing with the specific purpose to offer pseudo-acoustic, organic sonorities very uncommon to find in a presets library for an analogue synthesizer.

XA LittleOne XT Bundle is an all-comprehensive package, offering LittleOne and The Whole (the complete Expansions collection for LittleOne) together for a special price.

All customers who order the XA LittleOne XT Bundle will get a production-ready suite, including an accurate analogue modeling synthesizer, an analogue sequencer, a rack with 6 different effects processors (including a trancegate) plus a total amount of of 900+ multi-genre presets.

This offer / bundle is available today from the online Xhun Audio Shop.