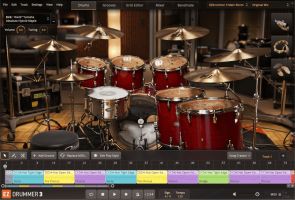 Toontrack has announced EZdrummer 3, the third generation of the company's drum software.

Although EZdrummer 3 is new in every sense of the word, we've gone out of our way to continue to build on the strengths and features that has made its earlier generations the absolute choice software for songwriters. To serve the songwriter with the best set of features for effortless creativity is still at the very heart of the new program – it's just a whole lot smarter, more intuitive and powerful now.

Some of the EZdrummer 3 highlights include:

EZdrummer 3 will be released worldwide on May 3. Available as of today, exclusive limited-time pre-order offers for both existing as well soon-to-be EZdrummer users are available at toontrack.com

EZ Drummer 3 seems like it will be a great tool for creatives, whose primary instrument is not the drums or percussion. Translation of ideas should be easier; to get the music out of your head and into a DAW.