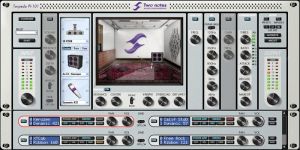 Two Notes Audio Engineering has announced the upcoming release of an update for its Torpedo PI-101 software plug-in; the Torpedo PI-101 Wall of Sound. This update adds several new features that have been requested by users since PI-101’s initial release at the start of the year, including multi-cabinet processing and stereo processing.

Two Notes Audio Engineering says "Recording with more than one microphone and/or re-amping tracks through different cabinets has always been the secret of killer studio guitar sounds. The Torpedo PI-101 Wall of Sound now makes it possible to load up to 100 channels of different cabinet/microphone combinations to create amazing recording setups, for example 2 different cabinets with 3 microphones on each. And, all from within a single plug-in. The PI-101 Wall of Sound can also be inserted on a stereo track to process each channel with the same cab/mic configuration. A “must have” for processing synths, drum loops and other FX samples."

Available for both Mac OS X and Windows in AU, VST and RTAS formats, the new Torpedo PI-101 Wall of Sound software is due for release in December 2011 and will be a free update to existing Torpedo PI-101 users.

Has anyone demoed this yet? I'm shocked I hadn't heard of it.