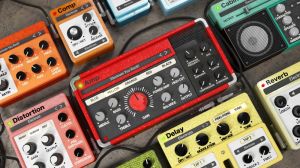 UnitedPlugins has announced that Electrum has been updated to v1.3 and the intro price period has been extended - so you may still buy it with 74% discount (€39) until the end of September, 2021.

For the duration of this summer, UnitedPlugins' Electrum, the all-in-one one-screen guitar solution, was tested in real life by real users who could have bought a license at discounted price and earn virtual cash for other UnitedPlugins' effects. Their valuable feedback helped to create two updates that improved the compatibility and reliability of the so called Mother of All Guitar Amps. Now, when version 1.3 has been released after fixing the last bugs the beta flag has been lifted.