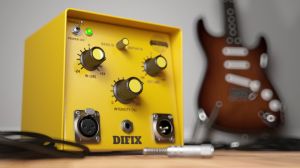 Both plug-ins by the SounDevice Digital brand feature improved internal processing and fixes for several compatibility issues. Also, the new Intelligent Sleep on Silence function (which helps to save CPU power) was improved.

DIFIX was created to fix issues caused by recording bass or guitar directly using improper inputs (some soundcards are equipped with). It has reached version 2.2.

Voxessor is intended to be used mainly for voice-overs (also in video editing app). UnitedPlugins updated it to version 1.2 and fixed an issue causing problems while used in DaVinci Resolve.

Both plugins have a 15-days fully working trial version available.